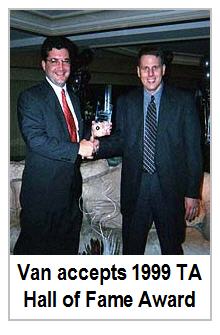 William "Van" Hefner, the person who inspired me to publish the association's first website back in 1997 is returning to publishing after an 8 year absence with www.TelecomSalesDigest.com.

Van was know by everyone in the telecom sales industry in the late 90's because of his Discount Long Distance Digest web site that 1) did a great job of objectively reporting daily news items for the LD carriers, and 2) did an awesome job maintaining a Hall of Shame page to heap special scorn upon "telecom crooks".

Before Telecom Association (originally One Plus Agent Association) began advocating for agents, Van was putting the industry on notice that telecom agents were comparing notes and that "bad behavior" would most certainly be reported.

For his pioneering advocacy of the channel,

Telecom Association bestowed our "Hall of Fame" award on Van in 1999 at our one and only trade show. The photo you see at the right is me giving Van the award back when we both had lots more hair.

Van sold www.TheDigest.com in 2007 and has been fairly silent in the channel partner space since then.

Hopefully Van's public return to the telecom sales scene will find that he's not lost his disdain for reporting on bad guys in the industry.

Click here to view Van's press release about his new site which is due to officially launch 9/1/15.