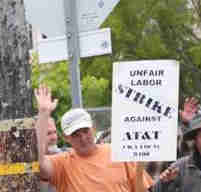 SAN DIEGO - Approximately 4,000 union workers throughout the State of California have gone on strike, according to The Communications Workers of America.

Although the CWA settled a much larger contract dispute with AT&T Mobility this past week, some employees in California have still not agreed to terms and are striking in part as a protest against what they categorize as unfair labor practices. The main dispute seems to center around CWA AT&T employees being reassigned to other duties without any prior notification to their union.

According to a local CWA official the strike may lead to delays in the installation of VoIP circuits used to relay 911 calls, but it is hoped that the strike will not otherwise directly affect customers.

A much larger CWA strike against Verizon was settled two weeks ago. That strike saw 40,000 union members take to the picket lines and caused a rash of service outages, mostly in the Northeastern U.S. Verizon blamed the outages on sabotage, while the union claimed that the outages were due to poorly maintained equipment. Investigations into the incidents are ongoing, but details have not as of yet been made public.

Update 06/10/2016: The Communications Workers of America today announced that had settled labor negotiations with AT&T. The move came just a single day after approximately 400 additional employees across California joined in the strike. All AT&T union employees should be reporting to their jobs as of Monday.